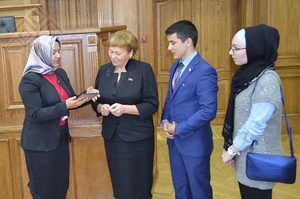 Kazan, Tatarstan. The second annual youth festival of Turkic people is held in the city from the 7th to 12th of October.

Among the representatives of more than a dozen Turkic nations (Azeris, Turks, Balkars, kazakhs, Kyrgyz, Nogais etc.) two groups are from Chuvashia - the National and Cultural Revival Society Irӗklӗh (Ирӗклӗх) and the Union of Chuvash Youth Suvar (Сувар). The program of the event consists of meeting with Tatarstan officials, sightseeing, seminars and presentations.

A representative of Chuvashia, Vladislav Moskovtsev, announced his work on a a manual for the teaching Chuvash language in schools of the Chuvash Republic and abroad. The manual will consist of training videos, including the works of poets, a description of the traditions of the Chuvash people and much more. Later he plans to include other languages of Russia in this program.

A Moldovan representative, Anatoly Tolmach expressed a commonly held view that 'the Turkic world has problems in language, customs and identity of the nations. Many of which, in my opinion, could be solved if we go after the Eurasian integration model (Russia's Eurasian Integration policies - Chuvash.org). Tatarstan has succeeded in achieving harmony between nationalities and become a model for other regions'.

Tatarstan is host for people of 170 nationalities (ethnicities), and has been very active when it comes to preservation of cultural identities and minor languages. The officials of the Republic are going to introduce the guests of the festival to the youth affairs policies and present innovative investment projects like Innopolis, Silicon Valley inspired IT-city.

The organizers of the festival are Youth Center Idel, the Federal National and Cultural Autonomy of the Tatars and the Ministry of Youth Affairs and Sports of Tatarstan. 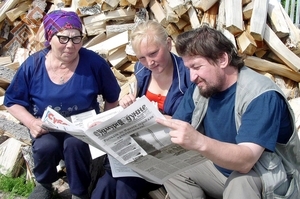 Udmurtia. Local bureaucrats of the Federal Anti-monopoly Services expressed that advertisements must be published in Russian language, which caused outrage among Udmurts.

The case is started by russian media supervision body Roskomnadzor. Once an Udmurt ad was spotted by agents of Roskomnaddzor when flipping through pages of the Udmurt newspaper it made they became suspicious and pulled out the advertising law and reported it as an offence violating the law. The advertisement was of performance by local poet Galina Romanova in the national theater. The agency watchdogs thought by publishing the ad in Udmurt prevented a Russophonic person from understanding and consequently attending the poetry event.

The newspaper's editor-in-chief Zinaida Ryabinia explained that the reasonimig by the federal anti-monopoly services agency is foolish. Why would a russophone take up a newspaper produced exclusively in Udmurt language? A decision like this is only out of disrespect of Udmurt language.

«Удмурт Дунне» (Udmurt Dunne) was established in 1915. Not long ago it celbrated its 100th anniversary. Throughout its history it was only published in Udmurt language, and to this day has never been accused of it.

Udmurtia is a republic and a federal subject of Russian Federation, located in the European part of Russia. Udmurt is a Finno-Ugric language and is official in Udmurtia.